Brigham Young University is a private college institution owned by the Church of Jesus Christ of Latter-day Saints. Part of the school’s reputation is it’s Honor Code that each student agrees to follow upon acceptance. Violations of the Honor Code, depending on the extent of the offense, can result in suspension or expulsion from the school.

Recently, Spencer Hadley, a senior and a starting lineman on BYU’s football team, was suspended for five games, including the rival “holy war” game this past weekend against the University of Utah, for violation of the Honor Code.

Today, Sports Illustrated published an article explaining Hadley’s story. Embedded within the article is a very moving story that each of us can benefit from.

The night before the Utah game (after Hadley’s suspension was announced), the team made a trip to the Promontory Correction Facility near Draper, UT to speak to inmates in the prison’s Substance Abuse Treatment Program. As a surprise to the rest of the team, the last person to board the bus was Spencer Hadley.

After a couple members of the team spoke and sang a hymn to the inmates, coach Bronco Mendenhall was the keynote speaker. Just before coach Mendenhall sat down after he finished speaking, an inmate in the back shouted: “Put Hadley in.” Hadley was then invited by Mendenhall to say a few words.

The article in it’s fullness can be found here, but here are a few excerpted quotes from what Hadley said to these inmates…

“I’ve done some things that have embarrassed my family, my teammates, my school and even my church. But I believe in redemption.”

“I know who I am. I know who you are. We’re all children of a Heavenly Father. All of us in this room have made mistakes. Not one of us qualifies as being the vilest of sinners. Yet having made mistakes I know that we can change and we can come back and right the wrongs that we’ve done.”

By the end of Hadley’s remarks most of the room was in tears.

All of us have made mistakes in our lives, but how many of us have taken the lessons learned from those mistakes and used them for the good of blessing others lives?

Truth was taught in that prison by a 23-year-old man that made mistakes. Hadley’s true character was not defined by the mistakes he made, but rather by the way he approached restitution. By the way he spoke to the inmates that night. No matter what mistakes we have made in our lives, a way of redemption has been provided for us. The atoning sacrifice of Jesus Christ is available 24/7. This eternally lasting gift can help us through our darkest hours. There is no better way to grow. There is no better Source to help us through life.

“The fist step on the road to redemption is to use our mistakes to bless others.” -Bronco Mendenhall 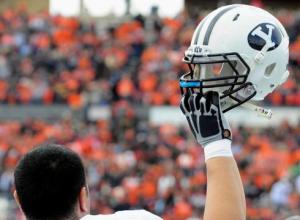