On Monday President Donald Trump visited Salt Lake City, Utah. His first stop, Welfare Square, a facility owned and operated by the Church of Jesus Christ of Latter-day Saints. President Trump toured the facility, learning about how the Church has been proactive in giving to those in need both in the United States and around the world.

The president also had a sit down meeting with leaders of the church, acknowledging the good that they do, and even singling out Elder Russell M. Nelson (President of the Quorum of the Twelve Apostles), recognizing him as one of the premier heart surgeons during his career, “…one of the best in the world.”

Church leaders have been getting negative feedback on their visit with the President on social media. But from my perspective it was nice to see the mutual respect between them and the President. The church has always been neutral when it comes to politics, but it was obvious that there was a respect maybe not for the man who holds the office, but assuredly for the office of the President itself, and I can always respect that.

Jesus himself wasn’t one to turn away an opportunity to visit or dine with someone because of who they were or what they had done. He was among sinners, and ministered unto them always. As a member of the Church I’m both happy and proud to see the leaders accept the opportunity and allow the Church to gain well deserved recognition for their efforts in providing much needed aid to so many around the world. 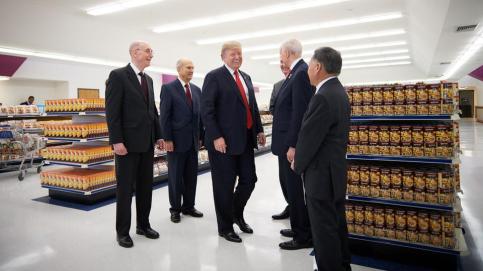